As the 13th Singles Day in China approaches, retail presales are shaping up to be impressive, as is the event’s support for green consumption and the healthy development of e-commerce platforms.

The annual event, which falls on Thursday, was first launched by Alibaba’s e-commerce platform on November 11, 2009, and has quickly grown into a big shopping spree. However, it now carries additional connotations, thanks to the growing corporate awareness of social responsibility and the country’s detailed regulatory policies.

Also known as Double Eleven, the festival is no longer just a consumer extravaganza, but also a platform to promote the concept of building a better life, according to Chris Tung, chief marketing officer of Alibaba Group.

“Here we want to impart ideas. What is considered a good life and what kinds of actions are worthy of common aspirations. In addition to the benefits, convenience and quality, we also hope to give some thought to long-term more in line with the needs of social development and take on more corporate responsibilities, ”Tung said.

This year marks the biggest Singles Day shopping festival on Tmall, with a record 290,000 participating brands and more than 14 million product varieties offering discounts, according to the company. However, instead of just luring consumers to sweep merchandise, the company began to encourage them to buy “greener.”

At 1 a.m. on November 1, one hour after the start of Tmall’s first three-day handover, more than 25,000 water-efficient flush toilets were washed away.

“If each toilet is used five times a day on average, then 225 tons of water can be saved in one day,” the company said.

Tmall plans to issue 100 million yuan (about $ 17.2 million) in green coupons this year, encouraging consumers to purchase energy-efficient home appliances and products with “green” certificates, as part of the efforts. aimed at supporting the country’s carbon reduction targets. . 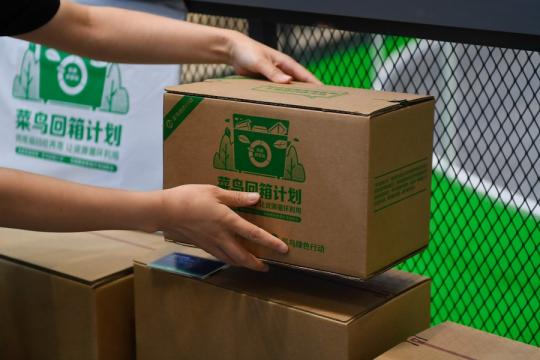 Photo taken on May 28, 2019 shows a recyclable paper box for packaging on display at the 2019 Smart Logistics World Summit in Hangzhou, capital of east China’s Zhejiang Province. (Xinhua / Huang Zongzhi)

“I recycled 11 parcel boxes on this year’s Singles Day shopping spree, and the award makes me feel encouraged and proud to be able to make my own contribution to saving energy,” said one resident. from Hangzhou, capital of Zhejiang province.

“E-commerce platforms have a natural advantage in promoting green consumption, and they can help establish an all-green supply chain,” said Jin Min, professor at Renmin University of China, adding that the Double Eleven buying spree can help take advantage of the huge green consumer market.